The site is secure.
The https:// ensures that you are connecting to the official website and that any information you provide is encrypted and transmitted securely.

Our Mission and Vision

On December 8, 2009, as part of our strategic planning process, the following vision was adopted by the Committee:

"Barrier Free Employment for ALL Vermonters"

For more information on the Governor's Committe on Employment for People with Disabilities please watch this short video from Eileen Casey, Executive Coordinator. GCEPD Introduction Video 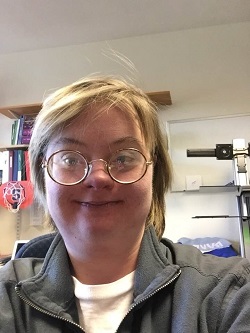 Stirling Peebles was hired at The Center on Disability and Community Inclusion as a Dissemination Assistant in 2014. In the same year, she became an official member of the National Association of People Supporting Employment First (APSE). She started a Facebook group called “The Employment Corner.” In 2015, she also became a board member of the Vermont APSE chapter as well. Stirling also works for Green Mountain Self-Advocates. Stirling completed the Human Resource Management Certificate Program at Champlain College in Burlington, Vermont. She had a 4.0 GPA at Champlain College. Stirling Peebles, a former Think College student and current Think College Dissemination Assistant, has been recognized by Vermont Business Magazine as a 2016 Rising Star.